The work of critically engaging the vernacular, begun in a somewhat fragmentary way in the decade gone by, promises much if taken up more concertedly in the decade to come.

Where I come from, you did not want to be “vernac.” To be vernac was to be backward, gauche, naïve. It was the epithet with which, during my teen years in Bombay and Madras, you dismissed the kid from a distant village who, knowing no better, slicked his hair down with coconut oil, tucked in his T-shirt and spoke English with the wrong accent (all our postcolonial accents were wrong but some were wronger than others). Never mind that he read and wrote in three languages to your one English, or that he had made it to college against odds that you couldn’t even contemplate. All you needed to know to dismiss him was that he was “vernac.”

Despite the testimony of my teen years, the vernacular is an ambiguous term. On the one hand, it is easy to understand the dismissal the vernacular routinely invites—after all, the term (see etymology) has always had the taint of the subordinate(d). On the other, there also exist neutral and even positive usages of the term, as in “vernacular architecture.” It is in this context of ambiguity that vernacular has in the last decade or so begun to do some heavy lifting as a critical term. An early example is Henry Louis Gates’s The Signifying Monkey, where Gates develops for his critical purpose already prevalent usages within African American intellectual traditions. In Gates, “vernacular” appears, amongst other things, as a marked sign of difference from a Eurocentric standard (for example, xix-xxii). The last decade or so has seen the fitful pursuit of similar work in a wider variety of cultural contexts as evident in, to name three examples, Pascale Casanova, Sheldon Pollock, and Emmanuel Eze. Contemporary usages are diverse in motivation as well as in how they understand the vernacular; but they share at a minimum a sense of the term as oppositional to the transnational, the national, and the standard.

I don’t always agree with contemporary uses. Sometimes the vernacular appears in them as simply the inauthentic or the indefensible mark of the provincial (echoes of my teen-age encounters). For me the vernacular is one point of vantage from which to resist conceptually (rather different than saying ethically) the overwhelming force of the trans/national. Scholars situated in the North American academy routinely overestimate the material and affective force of the trans/national. Recourse to the vernacular as a critical term is a way to temper the force of this overestimation.

For comparative literature, the vernacular is still a horizon of possibility—still the difference by which to (dis)orient the work of comparison. Learning from architecture, comparative literature might under the banner of the vernacular begin the painstaking work of understanding literary texts in terms of locality; or the notion of “vernacular literature,” understood appropriately, could disturb the headlong pursuit of a World Literature canon in ways that might lead to a richer understanding of diverse literary practices (rather than World Literature, as I have suggested in a recent book, “literatures of the world”—see especially, 124-137); or vernacular knowledges can be goads to alternative theory-making. All this and more—the work of critically engaging the vernacular, begun in a somewhat fragmentary way in the decade gone by, promises much if taken up more concertedly in the decade to come.

Shankar, S. Flesh and Fish Blood: Postcolonialism, Translation, and the Vernacular.Berkeley: U of California P, 2012. 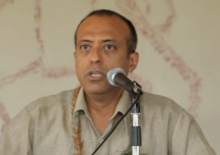 S. Shankar is a novelist, critic and translator. His latest book is Flesh and Fish Blood: Postcolonialism, Translation, and the Vernacular (U of California P, 2012), awarded Honorable Mention for the 2013 Rene Wellek Prize of the American Comparative Literature Association. He teaches in the English Department at the University of Hawai’i at Manoa and blogs at sshankar.net.