The Reign of the Amoeba: Further Thoughts about the Future of Comparative Literature

[I intentionally do not mention Spanish in talking about these interdepartmental models. Spanish now reigns supreme among foreign language programs at many institutions, and Departments of Spanish are often comparable in size and power to English Departments.  At numerous universities these are the two dominant Humanities programs, so that in parts of the country we can be said to have entered the domain of Spanglish.]

The extent to which the two disciplines are intermeshed is perhaps epitomized in the online journal CLCWeb: Comparative Literature and Culture, edited since its inception in 1999 by Steven Tötösy de Zepetnek and described on its masthead as a “peer-reviewed, full-text, and open-access quarterly in the humanities and social sciences [which] publishes new scholarship following tenets of the discipline of comparative literature and the field of cultural studies designated as ‘comparative cultural studies.’” The March 2014 issue is characteristic of the wide range of national literary traditions and authors represented in the journal, including articles on African, Irish, Turkish, French, Hungarian, American, Korean, Chinese, Russian, Persian, Italian, Romanian, and German-language writers.

The future of the merger between literary studies and Cultural Studies is literally embodied in several of the students admitted for Fall 2014 to the Graduate Program in Cultural Studies at my institution, UC Davis, one of the few such graduate programs in the country and hence keenly competitive. Chun Wai Chau, graduating in Spring 2014 with a major in Comparative Literature and Philosophy from UC Irvine, intends to expand on his honors thesis work on representations of farmer suicides in post-reform India in developing his interest in critical food and agrarian studies. Jonathan Doucette, who graduated from Oberlin College with a major in Comparative American Studies and a minor in English, plans to draw on critical queer and race theories to explore how the rapid digitization of U.S. culture produces new enactments of affect, desire, and embodiment. Andrea Miller, now completing an M.A. in Women’s, Gender, and Sexuality Studies at Georgia State after receiving her B.A. in English from Gardiner-Webb University, intends to study practices such as surveillance and targeted killings as they are negotiated through and within digital spaces. That some of the top Humanities students in the country plan to use their backgrounds in literature as a point of departure for Cultural Studies can be read as a harbinger of trends to come: these students ARE the future.

The interdisciplinary direction in which Comparative Literature continues to move is likewise evident in volume 66.1 of Comparative Literature, the flagship journal of the discipline, which features several essays comprising an ACLA forum devoted to the topic of remediation.  Defined as the process of remedying or correcting something bad or defective, the term remediation is traditionally used by comparatists to refer to “literature’s incorporation of and incorporation into other media and modes” (Sophia A. McClennen, “Introduction,” 1). In these essays the concept of remediation  is broadened and explored in a variety of its nuances. The contributors engage non-literary fields—media studies, ecocriticism, the law, disability studies, and education—in order to rethink the concept of remediation in Comparative Literature. Especially because this interdisciplinary work is showcased in the exemplary journal of the discipline, these essays can be seen to forecast what lies ahead.

In light of the proliferation of interdisciplinarity in the field at large, a workable and productive Comparative Literature graduate program of the future promises to be a hybrid program, combining seminars on primarily literary topics with the study of literary theory and another discipline. Such interdisciplinary study is available in the graduate curriculum at Davis in the form of Designated Emphases, which are tantamount to graduate minors in that students typically take four seminars in each area. Designated Emphases in which Comparative Literature graduate students have participated include Critical Theory, Feminist Theory and Research, Second Language Acquisition, Social Theory and Comparative History, Studies in Performance and Practice, and Native American Studies. In addition, graduate student instructors should be trained in pedagogy, whether in the teaching of a foreign language or in the instruction of writing and composition. A tall order—but Comparative Literature students tend to be prepared for the challenge.

Foreign language study remains paramount for graduate studies in Comparative Literature. As I reported in an article in symploke in 2008, when I polled the twenty-four students enrolled in the Comparative Literature graduate program at Davis in 2006 about their wishes concerning the future direction of the field, all of them emphasized the importance of studying foreign languages, and all felt that the study of literary texts in the original, from more than one national tradition, belonged at the center of the discipline. Yet students also noted the practical difficulty of learning several languages within a reasonable length of time, and I mentioned the phenomenon whereby a Comparative Literature student who learns a language as a non-native speaker is sometimes regarded with skepticism by students and faculty in the department representing that language. In this connection, I would endorse the suggestion made by one student in our program that graduate students receive credit for study abroad.

The issue of foreign language study is complicated by what I termed in the symploke article the “paradox of globalization” (222): the increasing ease and scope of international travel reveal the degree to which English has become dominant around the world, yet the growing prominence of the Middle East and South Asia as crisis zones, along with the looming power of the Internet, has heightened awareness and popularity of “critical” languages. The addition of Arabic and Hindi/Urdu to the foreign language curriculum at UC Davis in 2006 mirrors similar developments around the country. The rising importance of non-European languages has led and will continue to lead to changing attitudes toward the role of translation. In the 1993 ACLA Report on Professional Standards (the Bernheimer Report), published two years later as part of Comparative Literature in the Age of Multiculturalism, Charles Bernheimer could scarcely have realized the prescience of his recommendation that in the era of multiculturalism, comparatists should re-evaluate their definition as scholars and their standards for comparative work. “It may be better, for instance, to teach a work in translation, even if you don't have access to the original language, than to neglect marginal voices because of their mediated transmission” (44). This expanding receptiveness to minority literature in English translation inclines Comparative Literature in the direction of World Literature as this concept has come to be defined in the United States in recent years by David Damrosch and others---most simply, as the reception and circulation of texts from around the globe in English translation. Yet the study of literature in the original whenever possible is likely to remain a hallmark of Comparative Literature.[i]

Since our subject is the future of Comparative Literature, in the domain of translation I would like to introduce a model devised by an inhabitant of that future, Jordan A. Yamaji Smith, currently an assistant professor of Comparative Literature at California State University, Long Beach. His concept of “translationscapes” demonstrates the extent to which literary translation is culturally, historically, and politically inflected and hence subjective or perspectival. As Smith explains, this concept is indebted to Arjun Appadurai’s notion of  “global cultural flows” or ‘--scapes’ (ethnoscapes, mediascapes, technoscapes, financescapes, and ideoscapes) as formulated in Appadurai’s Modernity at Large: Cultural Dimensions of Globalization to convey the “historical, linguistic, and political situatedness of different sorts of actors: nation-states, multinationals, diasporic communities, as well as subnational groupings and movements” (Appadurai 33). Smith writes that “translationscapes can be thought of as global flows of language-based culture via translation, something that forms a selective, metonymic, partial picture of a ‘national culture’ for the target language community” (1). As examples of comparative translationscapes Smith cites those “of obscured literary histories through Octavio Paz, of ideological barriers to translation of ‘invisible’ texts from Oe Kenzaburo, of Upton Sinclair across iron curtains, of Shel Silverstein in global children’s literature, and of ‘translation-resistant’ poetry by authors such as Yoshimasu Gozo” (1-2). Demonstrating the ways in which texts are filtered through manifold cultural influences in the process of translation, Jordan Smith’s concept of translationscapes exemplifies the practice of interdisciplinary nurture that increasingly characterizes Comparative Literature. Metaphorically speaking, there is no end in sight to the reign of the amoeba.

[i] For a critical examination of the disservice often done to language by translation see Emily Apter, Against World Literature: On the Politics of Untranslatability (London: Verso), 2013.

Apter, Emily. Against World Literature: On the Politics of Untranslatability. London: Verso, 2013. Print. 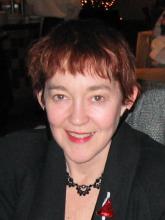 Her publications include The Counterfeit Idyll: The Garden Ideal and Social Reality in Nineteenth-Century Fiction (1984), Women in Modern Drama: Freud, Feminism, and European Theater at the Turn of the Century (1989, 1991), Look Who’s Laughing: Gender and Comedy (ed.) (1994), Christa Wolf (1999), Visual Culture in Twentieth-Century Germany: Text as Spectacle (ed.) (2006), “Ain güt geboren edel man”: A Festschrift for Winder McConnell on the Occasion of his Sixty-fifth Birthday (coed.) (2011), Literature of Fantasy and the Supernatural (ed.) (2012, 2013), and numerous articles on 19th-and 20th-century German and comparative literature. She is currently working on a book entitled The Dark Side of the Screen: Family Trauma in American Cinema at the Millennium.