This report on the national (US) state of the Comparative Literature undergraduate curriculum, updates the conclusions of a similar report done in 2005. As author Corinne Scheiner notes, early questions about whether Comparative Literautre should even have undergraduate programs (visible in the 1965 and 1975 reports) now seem to have entirely disappeared. The practical implications of the theoretical questions debated decennially in the reports on the state of the discipline, she suggests, are most evident in the structures of the undergraduate curriculum.

Data Collected and Findings of 2005 Report

The 2005 report also gathered data on funding, staffing, and teaching opportunities for graduate students where applicable.

Like the 2005 report, the current report is still data driven.[2]  The preliminary findings are as follows:

I. Total number of undergraduate programs that grant a BA in Comparative Literature[3]

We see this increase as positive as, despite cuts, the number of Departments/Programs of Comparative Literature has grown since the last study.

II. Percentage of BAs awarded in any given year at institutions that grant a BA in Comparative Literature 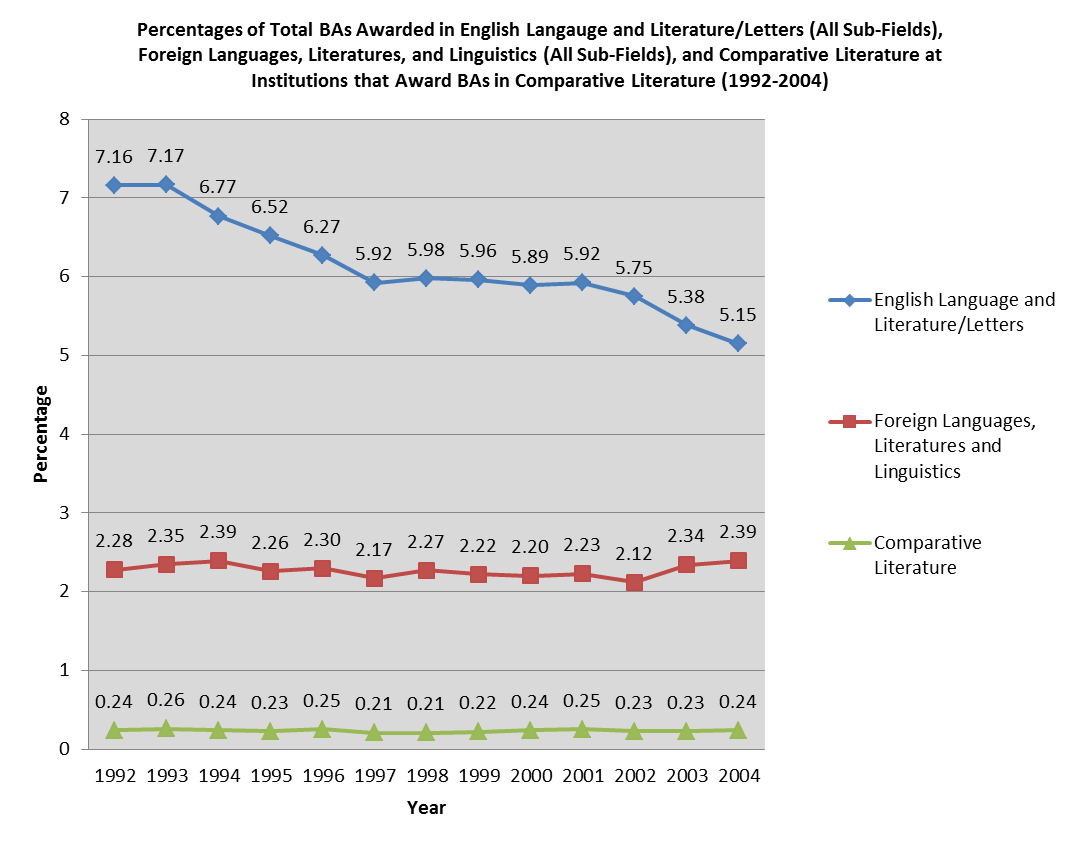 The most recent data collected determined that during the 10-year period under study (2003-2012), at institutions that granted a BA in Comparative Literature, the range of percentage of Comparative Literature BAs awarded each year was between 0.22% and 0.28%, reflecting a slight overall increase in percentages from those of the previous study.  The average was slightly higher as well (0.24%).  In contrast, BAs in English Language and Literature/Letters at these same institutions steadily declined from 5.22% in 2003 to 3.91% in 2012.  BAs in Foreign Languages, Literatures and Linguistics at these institutions showed a slight increase from 2.80% in 2003 to 3.05% in 2012, with a high of 3.20% in 2007 and 2008. 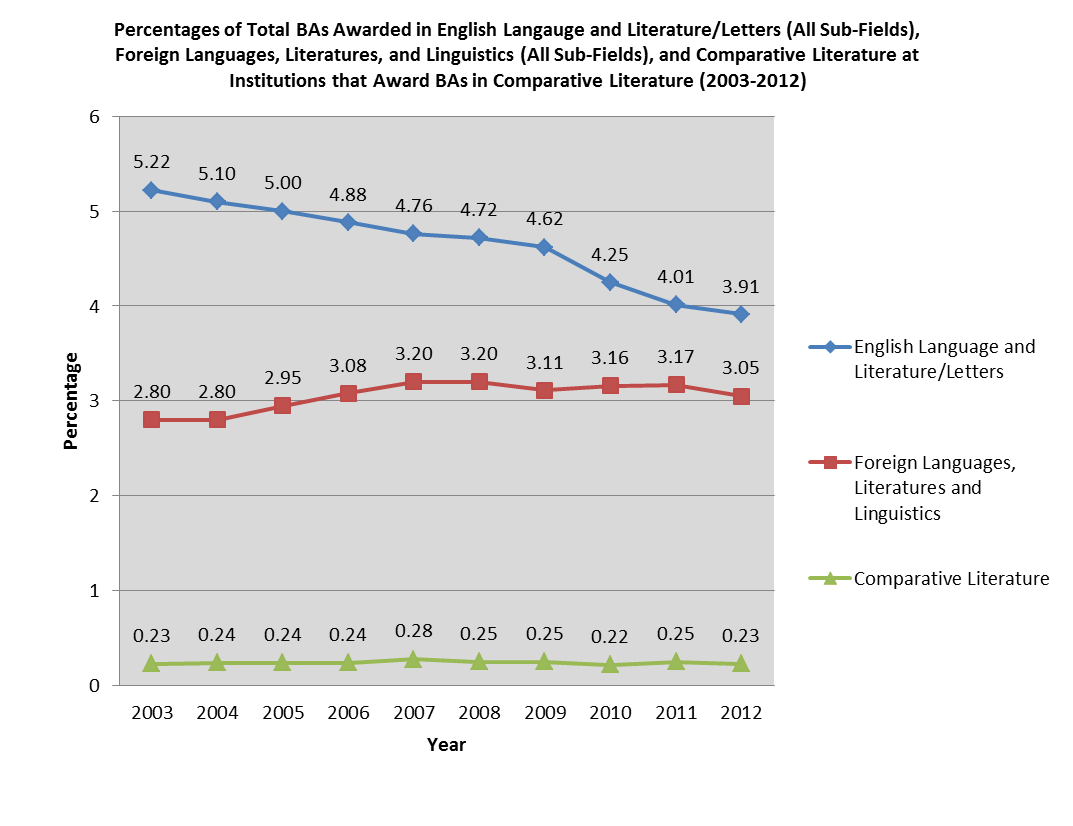 * The percentages for 2003 and 2004 differ from those previously reported in Figure 1 due to different constructions of the cohorts.

III. Requirements of the major

We are still in process of analyzing data regarding the requirements of the major, but can report that the large majority of programs still require proficiency in a language in addition to English.

Second, the report looks at Global Studies/International Studies, particularly at its relationship to current departmental structures in Comparative Literature.  It examines how the globalization of the curriculum and the frequent rise of an entity (department? major? other?) called Global Studies or International Studies is affecting Comparative Literature, both in terms of enrollment/number of majors and in terms of approaches to the fields of study in the curriculum.

Third, the report looks at the effects of Visual Studies, Film Studies, and New Media Studies on Comparative Literature.  Each issue points to a shift in the object under study and the question of what we mean by text.  This is not a new shift, but one that, in the case of new media, brings with it a host of new questions regarding how to examine and discuss the new texts as objects of inquiry.  In addition, it raises the issue of the multimodality of scholarly production and teaching.  There is a strong interest on the part of students to study these objects: how do they fit in our curricula?  The report will collect information on these issues via a survey, but will also incorporate qualitative, narrative, anecdotal examples.

Timeline, process, and an invitation

During the next 12 months, while the report is open, we will be collecting qualitative data as described above.  We will also solicit anecdotal examples on the three issues outlined above.

At the March 2014 annual meeting of the ACLA in New York, the ADPCL will convene a working session on the 2014 Report on the Undergraduate Comparative Literature Curriculum.  The session will meet on Saturday, 22 March, 8:30-10:00 a.m., in Silver 402, when we will present a draft of the survey on the issues outlined above.  The working session is intended for all Comparative Literature Department and Program Chairs or their representative, and breakfast is provided.  If you wish to attend, RSVP to Carey Eckhardt (Penn State), e82@psu.edu, by Wednesday, 19 March.

While the number of institutions offering a BA in Comparative Literature has been determined, as noted above, the survey to determine their further characteristics, and to provide comparisons with the 2005 data, will be sent out to department and program chairs in the spring.  Please be on the lookout for the survey and respond to it.

We will present our findings at the annual convention of the Modern Language Association in Seattle in January, 2015. If you are interested in contributing an anecdotal example (of no more than 1,250 words) relating to one or more of three main issues identified above to the report, please contact Corinne Scheiner (Colorado College), cscheiner@coloradocollege.edu.

“The Bernheimer Report, 1993.”  In Comparative Literature in the Age of Multiculturalism.  Ed. Charles Bernheimer.  39-48.  Print.

[2] Data collected thus far is subject to change based on responses to the survey that will be administered in spring 2014.