This submission unpacks the phrases "Middle East" and "Global War on Terror" and opposes their status as ideas of the decade .

Let’s face facts: the Middle East is in the ‘middle’ only if you look at it from Britain. Actually, it is west Asia. Just as the ‘global’ war on terror is one particular nation’s response to a tragedy precipitated by its own political machinations - by playing global Dada ( aka ‘strong-arm tactics’, introduced to the global lexicon by Idi Amin of Uganda, and totally unconnected with rebellion against ‘Reason’ in ‘Art’ ) . Both of these ideas, dangerously and inextricably entwined since Sept. 11, 2001, have opened the sluice gates of institutional funding and planning in the developed world, calling the tune of scholarly pipers worldwide. Since Comparative Literature is committed to locating and contextualizing ideas by grounding them in the politics of their foundational conjunctures, I propose, at the moment of decadal stocktaking, a careful look at the discursive formations obliterated by the emotive charge of these buzz-phrases.

The label ‘Middle East’, originating reportedly in the India Office in the mid-1890s, is no longer an officially accepted nomenclature at the United Nations, since it reveals the firmly colonial ‘centre’ from which the ‘East’ is defined. It refers to the western part of Asia, inhabited by plural societies wherein 30 percent of the people belong to a single religion . Despite popular belief, this ‘single’ religion is not homogenous : in this very area alone, it has been practised through different forms and manifestations since 8CE.

The phrase ‘Middle East’ was first used in public discourse to locate the War Game between Britain and Russia for control over the Persian Gulf. Subsequently, inhabitants of this region have been pawns in many games played among the powerful ranging from occupation, suspicion of nuclear capability, conflicts over resources to benign efforts to restore their own peace and wellbeing through ‘just’ wars. Following a single tragic event at the beginning of this decade, they have become the Arch Other in the ‘global’ war against terror. Those who claimed responsibility for this event also claimed belief in the religion practiced by the majority of west Asians. Consequently, the most powerful countries in the world decided to designate this religion as the single characteristic of the Arch-Other, distinguished from the more domesticable Others sprinkled across the globe, from whom the threat-perception is relatively low. Powerful nations win hands down in perceived vulnerability – obliterating the very real vulnerability of ‘errant’ undeveloped nations, which increasingly face the threat of chastisement from the global Dada for ‘wrong’ policies, as do citizens of those nations, for belonging to the ‘wrong’ religion.

Since the universal ideal of the justice of power requires that we understand what we invade… I mean emancipate, programmes, centres, journals and institutional paraphernalia preserving the Middle East as nomenclature abound. They flourish in the very same universities where Comparative Literature as disicipline, with its theoretical regalia of environmental, distributive, gender, galactic and other justices, resides with them in peaceful coexistence. Given this state of play, ‘world’ literature in its mission to see/show the world in a best-selling anthology, seems to have overlooked geographical and historical reality . Unless west Asia replaces the Middle East in the academic lexicon of the Humanities, and resistance to homogenization characterises our academic paradigms, we comparatists remain complicit in perpetuating what goes against the very grain of our discipline : we conscientiously hear other voices only in the language of power , blithely surrendering plurality to the global terror of reductionism.

Hence, I propose Middle East and The Global War on Terror, aka "ideas of the decade," as candidates for obliteration -- forthwith. 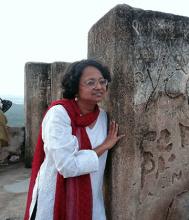 Ipshita Chanda is Professor of Comparative Literature, Jadavpur University, Kolkata, and, in 2013-14, Visiting Professor at Georgetown University, as Indian Council of Cultural Relations Chair of Indian Culture. She is the author of Packaging Freedom: Feminism and Popular Culture (2003), Tracing the Charit as a Genre (2003), Reception of the Received : European Romanticism, Rabindranath and Suryakant Tripathi Nirala (2007), and Selfing the City (forthcoming 2014). Her edited volumes include Literary Historiography (2004, in the series "Literary Studies in India"), Locating Cultural Change: Theory, Method Process (2011), and Shaping the Discourse: Women's Writings in Bengali Periodicals 1864-1947  ( 2013). She has translated Bitter Soil (1996), The Glory of Sri Sri Ganesh (2003),Two Plays by Sukumar Ray (2004), and Dhorai Charit Manas (2013).