The First Congress of the Peoples of the East, convened in the Azerbaijani city of Baku in 1920, had to address complex problems of plurilingualism and translation. Comparative Literature might reclaim the history of this congress as an alternative genealogy for the discipline, an experiment in displacing the discipline's other founding stories: Goethe’s invention of Weltliteratur in conversation with Eckermann, Leo Spitzer and Erich Auerbach’s missed encounter with an Orientalized Istanbul.

“The Communist International wants to unite under its banners speakers of all the languages of the world,” Grigorii Zinov'ev observed in his introductory remarks to the First Congress of the Peoples of the East, convened in the Azerbaijani city of Baku from 1-8 September, 1920.[1] Described by H. G. Wells as “a quite wonderful accumulation of white, black, brown, and yellow people, Asiatic costumes and astonishing weapons,” this first mass meeting of representatives of western European, U.S., and Russian Communist parties with communist and non-party delegates from Azerbaijan, Armenia, and Georgia to Afghanistan, India, and China is considered an important moment in the history of anticolonialism (Wells 96). Gathering close to two thousand delegates who spoke languages including Russian, German, English, French, Bulgarian, Persian, Turkish, Azerbaijani, Kumyk, Uzbek, Chechen, and Kabardian, the 1920 congress is equally interesting for what it tells us about the double bind of communist translation and plurilingualism.[2]

Despite Zinov'ev’s intentions and his rhetoric, the Congress records show that by its fourth session, a frustrated presiding committee decided to limit the number of translations to three “official” languages (Russian, Azerbaijani Turkic, and Persian), also requesting that each translation be abridged so as to “proceed economically.” Where this leveling of linguistic multiplicity marked the necessity of translation by use of common universal media, the extensive quarreling over the accuracy of translations marked the impossibility of translation as a task. In their introduction to the English translation of the Congress proceedings entitled To See the Dawn: Baku, 1920—First Congress of the Peoples of the East, John Riddell and Ma'mud Shirvani remind us (via the U.S. communist John Reed) that the British delegate Thomas Quelch's “timid and hesitant remarks were translated [into Russian] by Peter Petrov with such enthusiasm and such a spirit of invention that the hall soon erupted with cheers and shouts of 'Down with British imperialism!' as swords and rifles were brandished in the air,” upon which the “dismayed British delegate” objected, “I'm sure I never said anything like that; I demand a proper translation” (Riddell 27). Another noteworthy disruption occurred during the translation of the Azerbaijani delegate Dadash Buniatzade's speech into Russian: discovering that the translator Musazade had omitted portions critical of Ottoman and German imperialism in Transcaucasia, other delegates protested, demanding a complete translation.

Regarding the linguistic confusion imagined in the Biblical story of Babel, Jacques Derrida observed that “[i]f there is a transparency that Babel has not impaired, this is surely it, the experience of the multiplicity of tongues and the ‘proper’ sense of the word ‘translation’” (Derrida 199). My goal in reminding us of these non-Biblical episodes, and their illustration of the double bind of communist translation and plurilingualism, is to suggest that we might reclaim the history of the First Congress of the Peoples of East as another genealogy for the discipline of comparative literature — and to experiment with allowing it to displace our other founding stories: Goethe’s invention of Weltliteratur in conversation with Eckermann, Leo Spitzer and Erich Auerbach’s missed encounter with an Orientalized Istanbul.

In suggesting that we look to the unfulfilled promise of the First Congress of the Peoples of the East for another genealogy of comparative literature, I don’t mean to overlook the real limits of that promise. Certainly the organizers of the Congress, who included such prominent “Eastern” revolutionaries as the Azeri playwright and novelist Nariman Narimanov and the former theater actor Buniatzade, did their part in constructing an uncritically Orientalist “gray-haired East” destined to be awakened and led by a fraternal proletarian West. And the Congress paved the way for the new institutions of Soviet Orientology, including the All-Union Scientific Association of Oriental Studies (VNAV; Vsesoiuznaia Nauchnaia Assotsiatsiia Vostokovedeniia) established in Moscow in 1921, whose legacy we cannot uncritically affirm. Directed by the chairman of the Baku Congress’s Council for Propaganda and Action Michael P. Pavlovich, VNAV played a key role in the linguistic engineering of Turkic languages in the 1920s.[3]

But the historical circumstances of the First Congress of the Peoples of the East are in some ways unique, marking the overdetermination of a translation zone by both external and internal imperialism. Insofar as, grasped as a linguistic event, the Congress might be imagined as a rewriting of the Biblical story of Babel, offering in place of a transcendent God an immanent, heterogeneous common in alterity, it reminds us of the deepest ethico-political stakes of the translingual inquiry we pursue in Comparative Literature. The comparative literature of the past decade has neglected this history, and the comparative literature of the next decade might do better.

Important new work by Katerina Clark, Maria Khomitsky, and Susanna Witt, among others, suggests a way forward. Khomitsky’s study of the World Literature Publishing House (Izdatelʹstva “Vsemirnaia literatura”) established in Petrograd in 1918 under Maxim Gorky’s supervision suggests the broader significance of a neglected episode in early twentieth-century Soviet history. Clark has described an interval in the “latinate” longue durée of comparative literary history, as interwar Stalinist Moscow was rebuilt as a secular, transnational imperial center – “a fourth Rome” – of world culture through the “Great Appropriation” of the European Enlightenment. And Witt, suggesting an opportunity for both Soviet studies and translation studies, has observed that “[l]iterary translation in the Soviet Union may well be the largest more or less coherent project of translation the world has seen to date” (Witt 149).

The comparative literature of the next decade might let such work guide it toward the imagination of a literary and linguistic common, and a literary and linguistic communism, marked by the linguistic multiplicity of the First Congress of the Peoples of the East. To be sure, such work will need to account for the violence of, and develop an alternative to, the particular form of the romantically aestheticized literary common imagined by Pavlovich:

Let popular education spread in the republic of soviets, including the opening of thousands and thousands of schools, evening courses, academies . . .  All the separate streams, tributaries, rivulets and great rivers will intermingle in a fantastic and harmonious way, merging and feeding with their living waters one common international ocean of the poetry and learning of toiling humanity, freed for the first time from            national and class oppression. This will shine with such unprecedented, incomparable beauty as neither classical Greece, with all its amazing works of art, nor the civilization of the medieval and capitalist epochs, with all their blazing galaxy of immortal poets, artists, thinkers and scholars, could give the world.  (Riddell 161-162)

Following the consolidation of the USSR in 1922 as a federation with national-territorial autonomy, the Soviet Union embraced what Yuri Slezkine has called a program of “compensatory nation-building” in the modernization and nationalization of “culturally backward” (Slezkine 414) nations following an evolutionary Marxist timeline leading “to the lightening of labour, to democracy, to socialism” (the latter is Lenin’s phrase). At the cultural level, such compensatory nation-building involved the development of selected local vernaculars into national languages, at the expense of others that were suppressed. If this communist common can be understood merely as an amalgamation of self-enclosed, autonomous, national linguistic and literary units, then a comparative literature for the next decade, working from and across the languages of the former Soviet Union and the Third International, might revive the Congress’s more radical and unrealized promise of a heteronomous, nonproprietary comparative common.

[2] African languages were not represented at the Congress, but were invoked by Zinov'ev, imagining a transcontinental alliance between peoples of Asia and Africa (see Riddell 85). 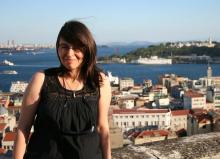 Nergis Ertürk is Associate Professor of Comparative Literature at Pennsylvania State University. She is the author of Grammatology and Literary Modernity in Turkey (Oxford University Press, 2011), the recipient of the 2012 MLA Prize for a First Book. Her work has also appeared in PMLA, Modernism/Modernity, boundary 2, New Literary History, and Jadaliyya. During 2012-2013, she was a Social Science Research Council (SSRC) Postdoctoral Fellow for Transregional Research on Inter- Asian Contexts and Connections, and during 2014-2015, she holds an American Council of Learned Societies (ACLS) Charles A. Ryskamp Research Fellowship. Ertürk is currently writing a book entitled Communism, Translation, and the Literatures of Revolution, on the translation of communist thought and practice in the Muslim Caucasus.